Recently I ran into an issue with a Rails web application where I wanted to add one-click unsubscribe links to transactional emails I send out. This website tracks the inventory of retail product websites; users subscribe to individual products and get notified via email when the price or stock status changes so that they can quickly make purchasing decisions based on the information.

Up until now, I’ve sent out these emails with a message in the footer stating “If you no longer wish to receive these notifications, visit the product page and un-watch the item.” I had linked to the product page in this message, but it was still unsatisfying to me to require users to sign in to their account to make changes. I think it could lead to a lot of frustrated users, because speaking for myself, when I get sick of an email notification and finally decide to unsubscribe, I want it done NOW with near-zero hassle.

If users can’t easily unsubscribe, they’ll be more likely to mash that spam button in their email client, marking the message as spam to their provider and creating a hard bounce on further emails sent to them, which in turn will give you headaches with your email service and possibly affect deliverability rates to all your other users (very not good!). So when sending emails, I try to keep my recipients as happy as possible.

So a better solution in terms of UX would be if users could simply click a link in the email footer that would immediately unsubscribe them from further notifications. But how to implement that?

As you can see, very simple.

I would also create a new Rails route and controller to handle a new URL with this unsubscribe_uuid parameter to be sent out with the emails.

Here’s a migration that would add this column and an index to the database:

However, I quickly started to realize this solution will not be ideal. The initial problem is caused by my actually deleting the subscriptions record: once the unsubscribe is complete and the web page displays a “success” message, the URL will now 404 due to the subscriptions record (and thus, the unsubscribe_uuid) no longer existing. Hitting reload on the page or re-opening old email links will now no longer work. I would prefer for the unsubscribe action to be replayable and idempotent, although perhaps with an expiration time for some security. Also, I have a stretch goal in that I would like to put a one-click “undo” button alongside the “success” message, which makes it simple to re-subscribe to the product if the unsubscribe was accidental - can’t do that if the authorization info for the existing subscription is gone.

Now, I could solve this problem by adding the paranoia gem and performing soft deletes on the subscriptions table rather than truly deleting records. However, I tend to prefer to truly delete records, and also set up foreign keys so that the database also deletes dependent records (I embrace the database enforcing referential integrity). I also tend to write real database triggers and constraints rather than fully relying on Rails validations, again leaning on the database to enforce referential integrity whenever possible. I’ve seen enough surprising or buggy behavior in complex ActiveRecord callbacks and Rails’s transaction handling to warrant that.

Anyway, even if I changed to soft deletes, I’d also have to adjust the way I do insertions to this table to always look for an existing soft deleted record first, and re-activate it if it exists. Alternatively, I could always insert a new record, but I’d have to change my index_subscriptions_on_user_id_and_product_id index due to it being unique for (user_id,product_id) pairs - multiple subscriptions for the same user-product pair could not coexist given the existing definition. One way to fix the index in Postgres would be by using a partial index:

However, I feel like either solution is starting to get quite messy. It would get even more messy if I started to add new types of email actions besides unsubscribe.

Drawing on the age-old wisdom on how to solve any Computer Science problem by adding another layer of indirection, I briefly thought moving the unsubscribe link to its own table/model might make things easier. These records and their associated UUIDs would never be deleted; rather, when a new subscription record is created, an ActiveRecord callback or a database trigger would fire to ensure this associated record exists.

This didn’t get any further than a brief thought in my head, because it really isn’t much (any?) better than just having a column on subscriptions with a soft delete mechanism. But it did get me to start thinking about reducing the dependency on the database, leading me to the idea of possibly hashing some data that is private to the user and static (e.g. their join date + database PK), and using that hash as a secret token to authorize unsubscribe links for that user. That sort of lead me to JWT and my final solution.

The core problem we are trying to solve is how to serialize an allowed action in a way that an anonymous (not-logged-in) user can present it back to us, while being sure that it’s something that we generated and authorized, and hasn’t been tampered with (e.g., users cannot change the user_id or product_id of an unsubscribe target).

For solving these sorts of problems, the database is a tool that a lot of web developers often reach for first out of habit, like I did. It’s a convenient tool because of our inherent trust in it (only we can write to it - nobody can create fraudulent UUIDs in the above ideas) and because we can store an arbitrary amount of our dynamically generated objects there. However, it is also inflexible in that you now have to manage the lifetimes of these objects you are creating, which is made harder by the fact that they’re often attached to lifetimes of other objects, causing annoying issues like I had to think about above with my UUIDs.

The database solutions I had thought out are also not very expressive or flexible. At the core I have to generate a shared secret and infer a lot about what that single value means in my code. If I want to add varying behavior to these tokens I’d have to add additional fields to the table to configure that, while being extremely careful to not mess up existing tokens that I’ve generated.

A better solution to the stated core problem is for the web app to serialize allowed actions in a more expressive data structure such as JSON, and use some cryptographic math (a digital signature) to ensure that the data was generated by us. We can simply hand this data to the client - no need for us to store anything! - and later when they hand it back to us, we can verify the signature to make sure we are the entity that generated it and it hasn’t been tampered with.

Luckily someone has already thought all this out and made it friendly for web-specific use cases!

There is a handy debugger on the JWT site’s main page that shows a nice color-coded example token and how the different pieces break out: 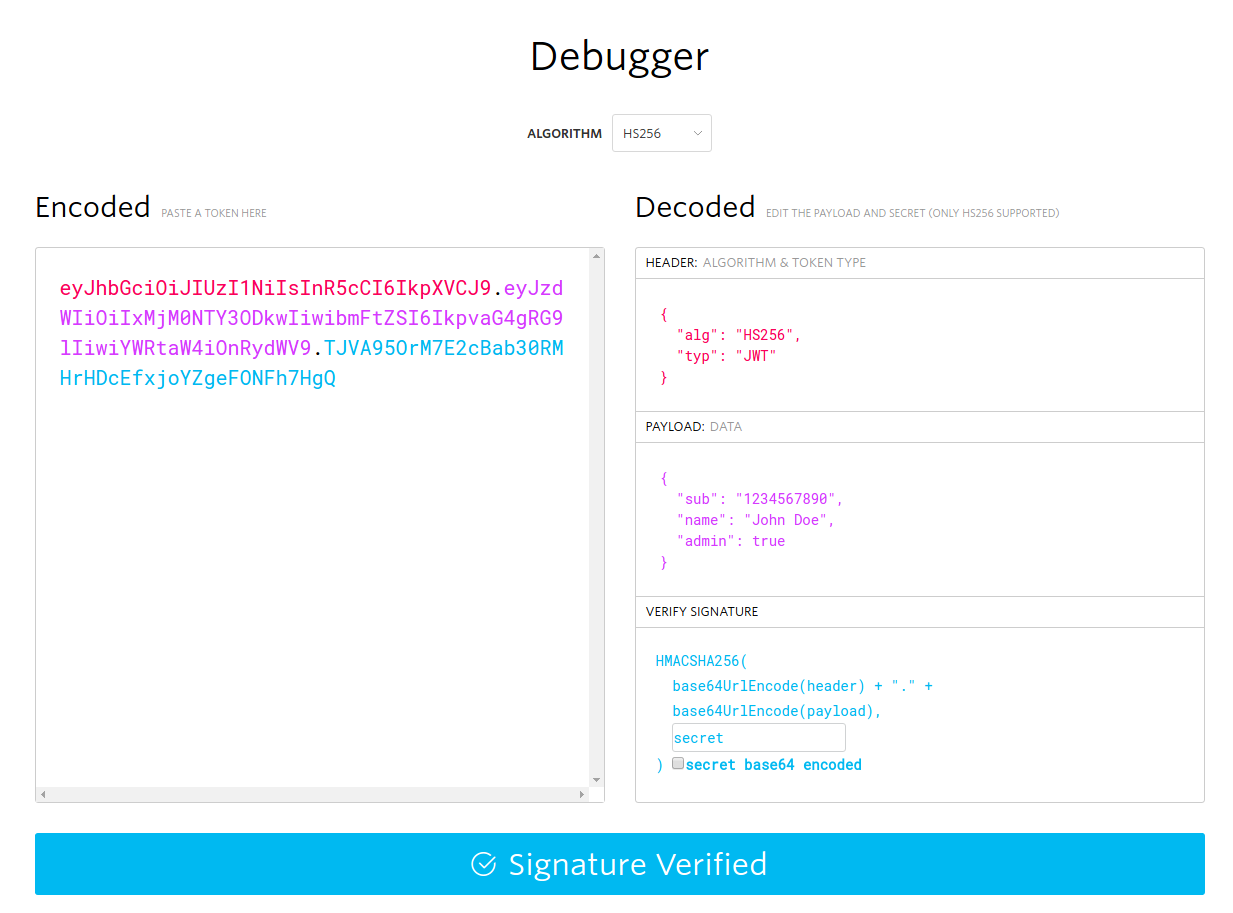 One nice thing about JWTs, that you can see from the example, is that the tokens are so short that they can easily fit in URLs (assuming you don’t create crazy large payloads).

It’s worth playing around with the debugger and then reading the introduction page to get better explanations about JWT than I can provide here.

One important thing to note is that the header and payload are not encrypted; they are only Base64URL-encoded. There are ways to encrypt JWTs - although that will expand their size - but by default that’s not how they are made.

Here is my coded solution to the problem using the official JWT Ruby gem. I have a ProductSubscriptionToken class, which makes it easy to encode a subscription as a JWT as well as decode a JWT back into a Ruby data structure:

I use an environment variable, PRODUCT_SUBSCRIPTION_TOKEN_SECRET, to store the secret I use to sign JWTs. I personally generate secret values using SecureRandom.hex(64). I don’t show it here, but I also use a gem called ENVied which ensures that this environment variable has been provided before starting the Rails application (if not, it fails fast). I think that’s a good practice to avoid passing nil as a secret to your hashing algorithm, which could be completely unsafe! (Note: I just tested encoding with a nil secret and it errored out, saying TypeError: no implicit conversion of nil into String, however encoding with an empty string secret works fine!)

I use HS256 (HMAC with SHA-256) as the MAC algorithm, because it is a symmettric algorithm - the key used to both sign and verify the message are the same (I’m both signing and verifying the message myself, and the key never needs to leave the server so there are no distribution concerns). If I had a use case for verification to be done by another party, there are asymmetric (public key) algorithms JWT supports that can be used instead.

Finally, note that it’s just my personal Ruby style, but when decoding I use Right() to wrap successful results and Left() to wrap unsuccessful results. The specific implementation I use is from the kleisli gem, however the names and idea are from typed functional programming. This is just my preferred way to represent success or failure as values, there’s nothing specific to JWT here.

The next things implemented are the new route and the controller that parses a JWT parameter into either a set of successful ActiveRecord objects or a simple error message:

The view is pretty simple and self-descriptive:

Since we have full access to the user and product, it would be easy to some day add an “undo” single-button form to this page, allowing the user to easily re-subscribe if they had clicked the unsubscribe link by mistake.

This is my first time using JWTs. I don’t see myself reaching for them often for the types of web apps I build, but in these kinds of scenarios they seem like a great fit.

Let me know what you think! Is there a simpler option I’m missing? Have you used JWTs before, and if so what was your use case? Was it a good or bad experience - any problems you encountered?