I've started writing brief reviews or summaries of books I've read. This is one of them.

Mostly standard fare Vietnam War book, with an interesting twist in that it covers a squad of Marines embedded in a Vietnamese village (Binh Nghia) and fighting in units mixed with local allied Vietnamese milita members (Popular Forces, “PFs”).1

This is very different to the typical American strategy in Vietnam, with American troops living in bases and conducting “search and destroy” missions, at arm’s length from the local populace and South Vietnamese ARVN troops.

It’s an interesting “bottom-up” approach to counter-insurgency that, as the book portrayed it, seemed to be effective in fighting the Viet Cong (VC). Although apparently it never graduated out of essentially an experimental status given it peaked at about 2,000 Marines in the program.

The village in question, Binh Nghia, had some local history that made it more resistant than average to Viet Cong influence, and fertile ground for a base set up to counter them: 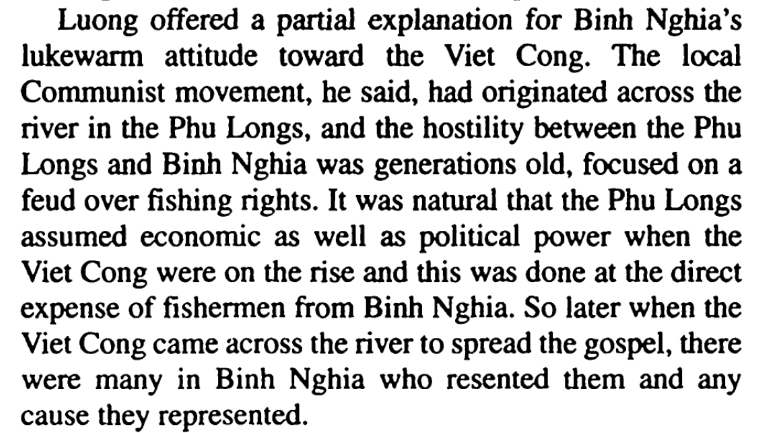 The blending of forces reminded me of MACV-SOG’s approach of combining with “indigineous” troops per Across the Fence by John Stryker Meyer.

Curiously I can’t find any evidence that the strategy was reattempted in modern theaters when the USA invaded Iraq or Afghanistan. Those wars seemed to be fought on the ground in ways reminiscent of the top-down “search and destroy” strategy of Vietnam, keeping both the civilian population and local allied troops at arm’s length - living in bases apart from the local populace, training local troops but not fully integrating them with US forces.

Makes you wonder if it would’ve made a difference in those wars, particularly given the staggering number of green-on-blue incidents in Afghanistan.

One thing I really enjoyed about the book is the color it brings to the Vietnamese villagers, compared to most other Vietnam War media where the villagers are an unknown quantity - strangers - and typically to be distrusted.

These soldiers, though, can’t help but get to know the villagers given they live amongst them, and the book does a good job showing the tension the villagers face daily in the tug-of-war between Viet Cong and American forces, where simple actions - even a friendly smile - could be a sign of sympathizing and mark the villager for severe reproach or even death.

For example, one teenage village girl was offered a small amount of money - but a life-changing amount to a rural Vietnamese villager’s family - to wash the Americans’ laundry. The Viet Cong caught up to her, and executed her when she refused to be kidnapped and work as a VC nurse.

Villagers were also cajoled by Viet Cong into being their pack mules, hauling rice or other goods, or simply giving them a heads-up when American patrols were approaching by making noise.

There were of course still Viet Cong spies and sympathizers in the village, but it seems the Americans had an easier time sussing them out using the information network they and the PFs had built based on their direct ties to the village.

There are also harrowing stories of the type you’d probably expect from a Vietnam War book. One that comes to mind is an outpost being breached by elite Viet Cong sappers, then overrun, leading to American casualties. Another is a baby caught in the middle of a firefight being shot in the gut, and an American soldier’s solo marathon sprint through the jungle to get her casevac’ed.

Overall the book provides a unique angle on the Vietnam War, and I’d recommend reading it if you enjoy other books about that conflict.